Celebrating #BlackHistoryMonth at House of Blues

For over 20 years, House of Blues has curated one of the nation’s largest collections of folk art at our eleven locations across the country. These permanently displayed pieces - what we like to think of “visual blues” include more than 150 self-taught, predominantly African-American artists. Their art has played an integral role in helping advocate for human expression, racial equality and spiritual harmony.

These notable artists have added their voice to the powerful message of Black History Month. To honor these talented creators, we are sharing special highlights and exclusive stories! 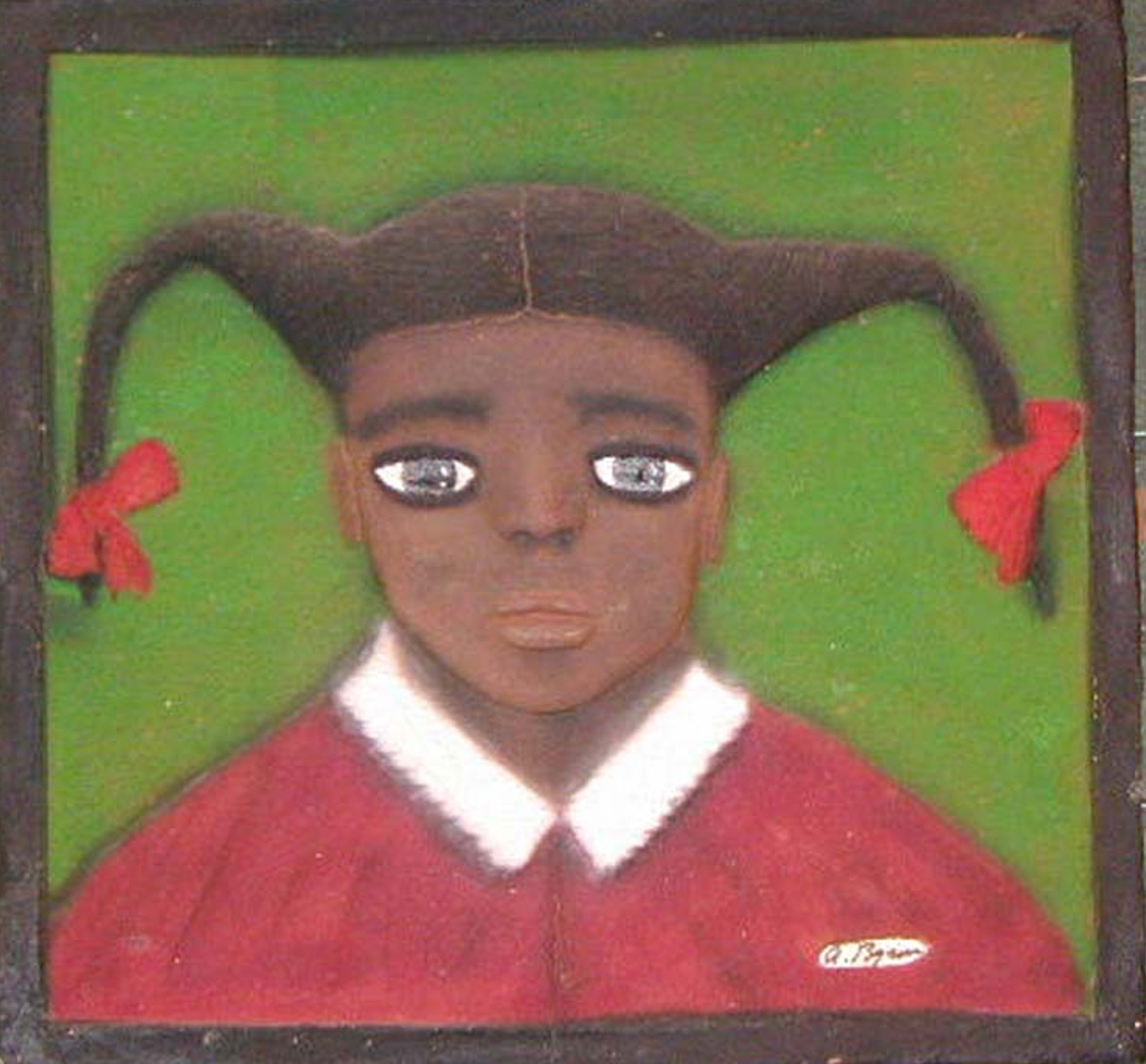 An American sculpture, painter, U.S. Navy veteran, small business owner and city councilman, Archie Byron was born February 2nd, 1928 in Atlanta’s downtown Buttermilk Bottom neighborhood. Byron was a man of many talents who owned multiple small businesses, including the country’s first African-American owned private investigation firm. Perhaps inspired by his early friendship with Dr. Martin Luther King, in 1981 Byron decided to make a difference in his neighborhood and ran for Atlanta City Council, ultimately winning a seat and serving as a member for eight years.

Byron’s inspiration for creating folk art came from an uprooted piece of wood that reminded him of a gun that he encountered while working as a nighttime security guard on a construction site. He took it home, shaped and sanded it and proudly hung it on the wall. He quickly became enraptured with roots, scouring various lakeshores, riverbeds and the woods near his home for interesting wood formations from which to create functional pieces of art. One day in the shop, Byron discovered piles of sawdust that he repurposed and used for various paintings and life-size statues that often reflected his interest in social and racial issues, as well as his pride in his cultural heritage.

Our collection is lucky enough to include many pieces from Byron, including Anatomy, Lakeside, Puzzles, Tall Boy and several more. 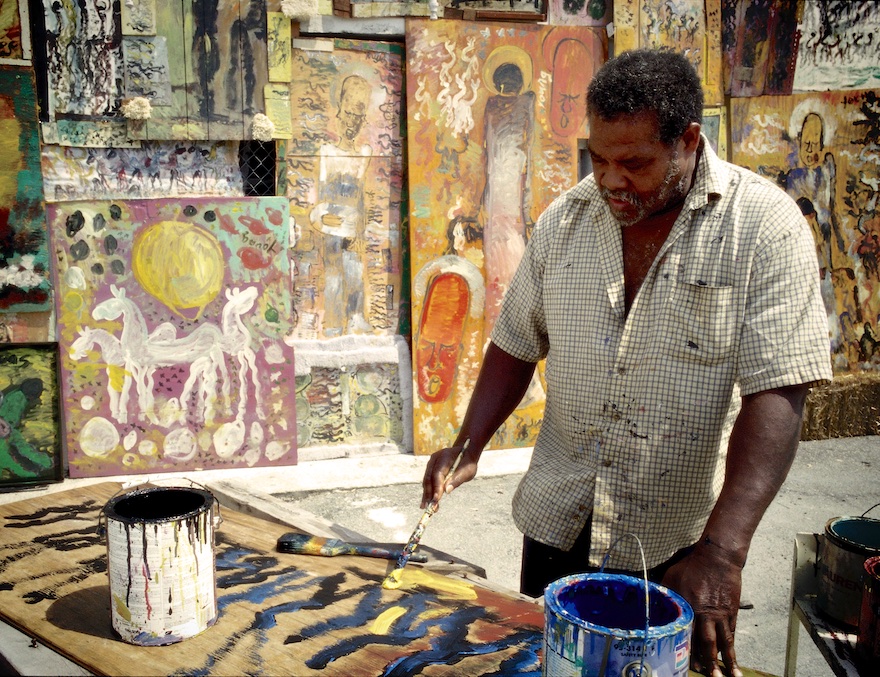 Raised in the Overtown neighborhood of Miami, Purvis Young was first introduced to art as a young man by studying the various artists and techniques that he found on the shelves of public libraries.

Influenced by American history and spiritual folklore, his visual vocabulary was vast. He often focused on utilizing discarded materials he collected for his paintings, believing that recycling and upcycling were not only critical to his art, but also to the environment.

Inspired by the South Side Chicago’s Wall of Respect, Young started painting various murals and civic art of his own in protest of war, poverty and racial indifference.

Young's “Freedom Fence,” originally located outside of the House of Blues Orlando, has since been carefully disassembled into smaller pieces of art now located inside of House of Blues Houston. Other notable Young pieces in our collection include Tigrett and Young, Truck, Watching Over, Come Together and more. 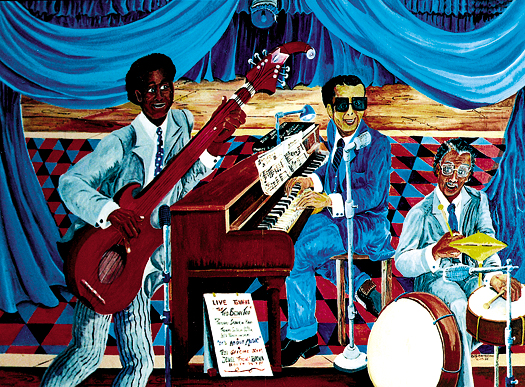 As a child growing up in Corpus Christi, Texas, Dr. Ruth McRane was extremely curious and eager to learn. She carried that passion throughout her entire life, eventually earning degrees including a Master's in Art Education, another Masters in Secondary Education, and a Doctoral Degree. Dr. McCrane dedicated her early life to teaching others about art, and after three decades teaching she decided to retire and continue her journey with art by painting self-portraits.

The inspiration behind her art came from her past. Each painting shares a unique memory in specific detail, typically revolving around her life growing up in rural Texas in the 1930’s and 40’s. Her work features bright and bold colors that create a festive atmosphere that engage the viewer.

Displayed throughout our venues, you can find many of Dr. McCrane’s pieces, including Blind Musician, Even the Children, Gypsy Woman, Trio, and more! 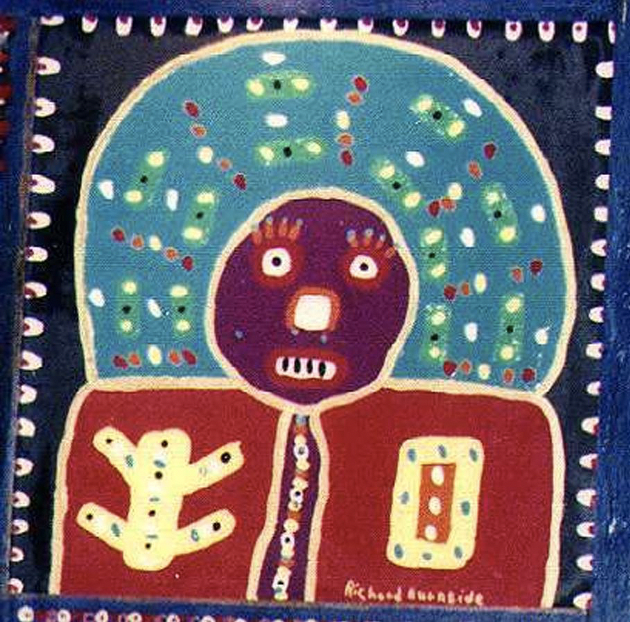 Baltimore-born and South Carolina raised, Richard Burnside joined the Army early in life where he served as a cook. After the army, he continued his career in the culinary arts as a chef, creating soul food that was so good it would “make your stomach hurt with wanting,” he said.

There is no clear explanation as to why he started painting, but it’s well-known that his pieces were stylized interpretations of things he had seen; inspired by works of art, objects of daily life and even his dreams. From Burnside’s visions of ancient times, he created an Africanized mythology from biblical stories, folktales and even nursery rhymes in his work.

Burnside’s paintings regularly depict kings and queens wearing crowns that are adorned by small marks that signify their royalty. Each element in his paintings has a very particular meaning, from markings that represent different tribes to symbols such as halos that distinguish the morality of his subjects. Some notable pieces featured in our House of Blues collection include King and Two Queens, King with Aqua Crown and more. 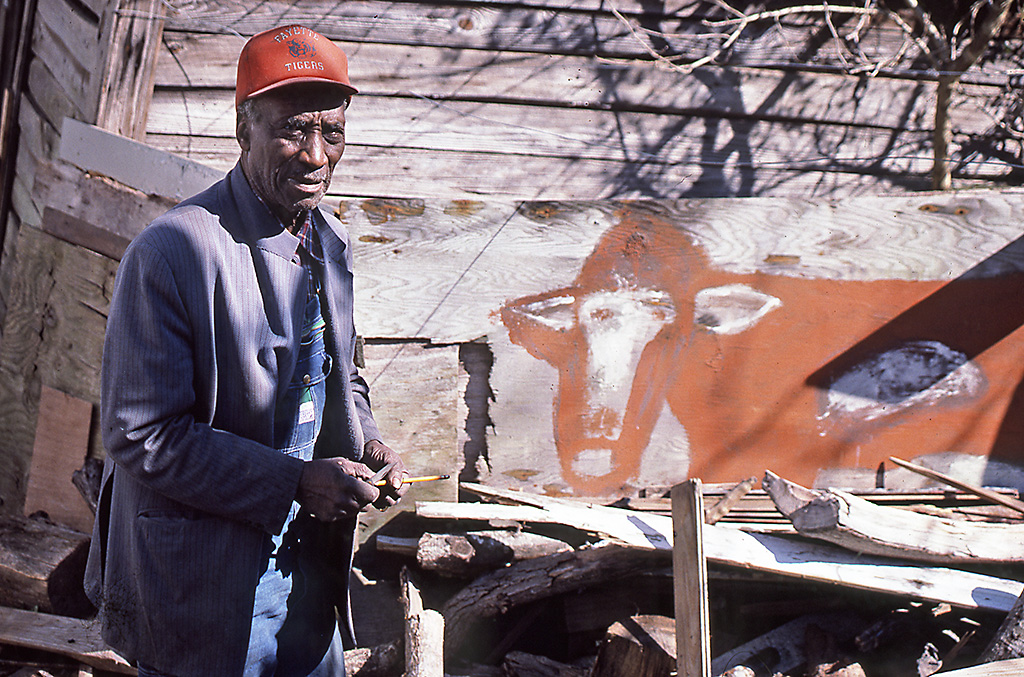 Jimmy Lee Sudduth’s love for art started at an early age. This interest came from his mother who would gather various herbs and roots in order to make natural medicine in their rural Alabama home.

His first memory of painting came at the age of three when he would draw in the dirt or on various tree trunks around his parents’ home using whichever simple elements he could find. He noticed his mud paintings would always wash away quickly, so one day he combined mud and honey and painted the mixture on a tree stump. Three days later the image remained, and so he began using this mixture for his art (later introducing clay and paint) while tinting it using grass, berries, or even lawn-mower exhaust.

Sudduth’s paintings include self-portraits and major city skylines, but predominantly scenes from his everyday life in Alabama. Notable pieces from our collection include Log Cabin with Blue Roof, Soul Train, Man on Bicycle, many self-portraits and more. 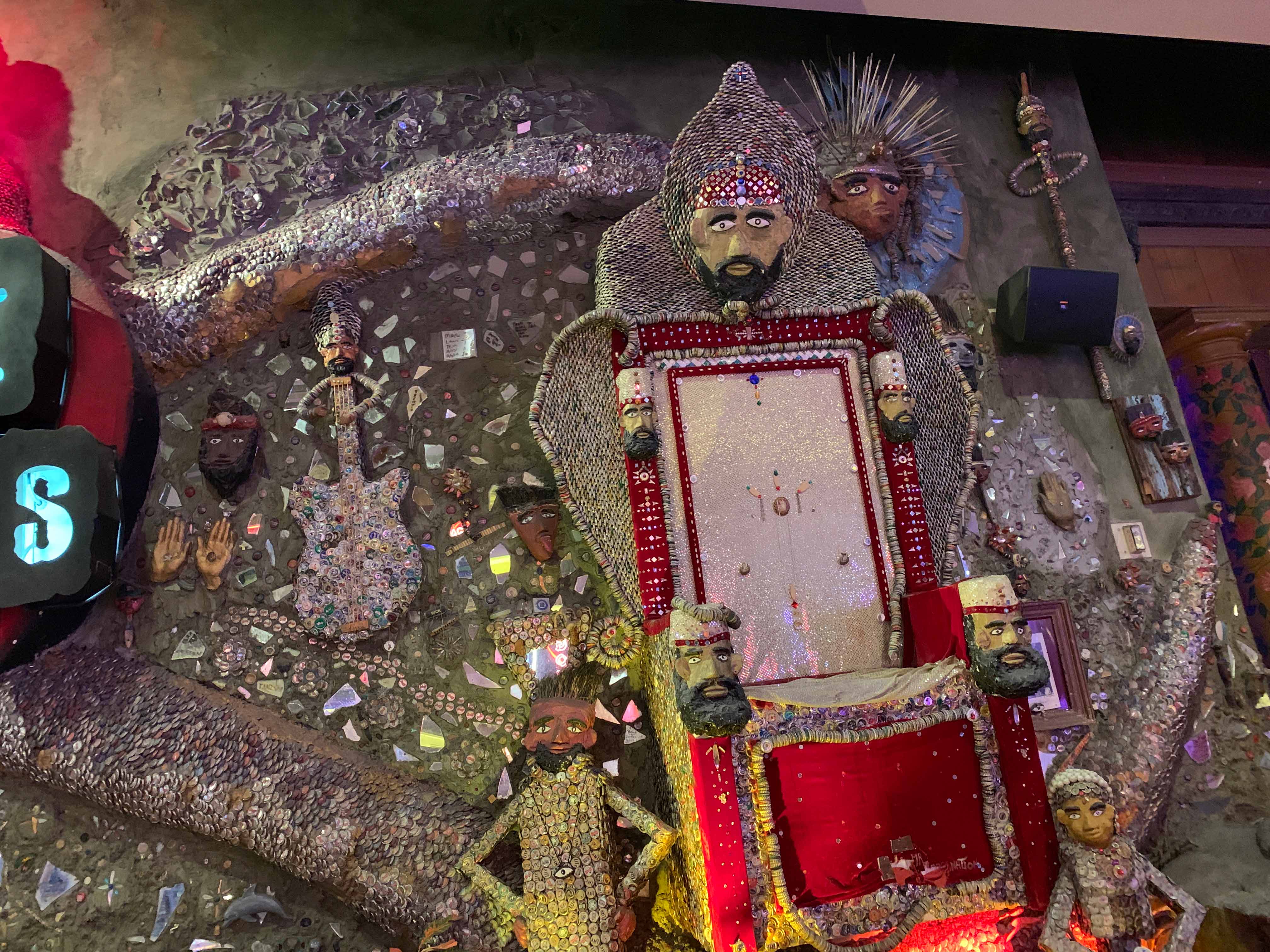 Gregory Warmack, otherwise known as Mr. Imagination, grew up in the Chicago area as the third of nine children. Despite having no formal training, he began making art at a young age. Ever since he can remember, he used a variety of creative outlets to express his artistic vision, including jewelry-making and art education for local youth.

At 30, Warmack suffered a near-death experience that dramatically changed his style of art. During his hospitalization, he had a spiritual vision which he described as “very peaceful, almost as if I was traveling through history and looking at ancient civilizations.” Once he was back to creating, he focused on giving new life to discarded materials like trinkets, memorabilia, or bottle caps, which he called “magical material.” Mr. Imagination is best known for his sandstone self-portraits, often depicted as an ancient pharaoh, highlighting his visions from his traumatic experience.

Two very notable Warmack pieces in our folk art collection include the Unity Arch at House of Blues Orlando and the Mr. I. Throne at House of Blues Las Vegas. Both use items like discarded paintbrushes, shards of glass, pins, keys, nameplates and more to create their extravagant textures.

Thank you for celebrating Black History Month with Live Nation Special Events and House of Blues. We hope you find unity, pride and inspiration in these amazing creators and their art!